Creating and living one’s dreams takes focus, drive, determination, and letting go. Skin on Skin, a short fashion film, about the dreams of one woman. The film follows her dream from runaway, runway, to designer of the Runway RunAway Collection® including the Dream Dress.

The fashion film, Skin On Skin, follows the autobiography, Runway RunAway: A Backstage Pass to Fashion, Romance & Rock ‘n Roll. The story is Lorelei Shellist’s dream to become a model at the young age of 15. Her dream took her from runaway to the runways of Europe and now designing her own collection. The film captures the transformation from being young woman to lover to fulfilling her dreams.

The film production continued to have it is struggles and challenges. Lorelei with her strong independent personality completed her dream just in time to submit for La Jolla Fashion Film Festival. This is one more step closer to her completing her dream of her own collection. The film journey created new dreams for many involved with the production.

Two scholars’ dreams were assisted when they were awarded scholarships for the year at San Diego Mesa College. Dani Smith was awarded the Runway RunAway Fashion Design Scholarship. She volunteered for the weekend at La Jolla Fashion Film Festival. Ana Alvarez awarded Shellist Memorial Music Scholarship joined Lorelei on the red carpet for the premiere. The production, cast, and crew are from various backgrounds walks in life, and dreams of their own.

Igor Djenge originally from Southeastern Europe moved at the age of 17. He loved Bay Watch and his dreamed of becoming an actor. Moving a great distance from his homeland the one thing he brought with him is his optimism.

His first acting role was in Romeo and Juliet. He landed the lead role, Romeo. Igor felt lucky to have such a role. When the performance was over he knew that he must stay with acting his whole life because it is fun playing someone who is not you.

You can often find him at the beaches in Southern California. This is a therapeutic location for him, but he never brings a towel. He always dries up naturally by the warm winds.

The most challenging aspect of acting for Igor is to portraying someone else perfectly without using his own character and movement. He states, “being able to play someone who is totally opposed can be challenging, especially if you want to look so convincing and leave the audience speechless. That’s what practices are for and we all can become so transformative in just a few days. Also, being able to cry out of blue at the stage is hard.”

His favorite part at the set of Skin on Skin is Lorelei’s attitude. He said, “she is so friendly and she greets everyone very lovely! Charming lady! My favorite part working with the crew is how we all came from different backgrounds end up in one room. We introduced ourselves and shared our experiences.”

Igor works hard to accomplish his dreams and does exactly what he visualizes in his head. He faces his challenges everyday, “being deaf sometimes sets some boundaries for me, but I ignore it and go ahead with things like the rest of people.” You often will find videos on Facebook that he stars and produces”.

Experiences can lead to success. Igor’s perspective is, “someone who is being successful is how do they feel inside. Because how you feel inside automatically brings it outside and the rest of us can see it from a distance. If they feel they have completed everything and they are living a very mellow life without chasing anything else, that’s totally fine too because they feel satisfied. But there are also some people who have reached so many goals and still have so many more left. Being success [sic] can have so many meanings. I just named some. I know that I won’t stop doing television shows until I die because I’m at my happiest whenever I have to hop in my car and drive to set.”

The way you start your day is so important to success. Igor starts his morning with Acai bowl with chia seeds on top of, and adding sliced kiwi and raspberries.  He states, “some people cannot live without coffee; I can’t live without Acai (super food from Brazil).” Igor continues to focus on his dream day by day.

Gabriel Langbrunner, at Gabriel Styles U, styled on location with the crew in Los Angeles. Last year Gabriel mentioned at International Fashion Film Awards last year his dream was, “to be a top stylist.” He has taken big strides in that direction in the few months since the IFFA. He has not only been on set for Skin On Skin, but bi-coastal. He has styled Jadyn Douglas, Christina Wren, & Emily Robinson to name a few.

Gabriel says, “Bringing one’s image to life is simple. BE YOURSELF. Don’t conform to what people want or think you should look like. Wear your clothing with confidence, smile and seize the day. Have fun creating your own branding style.”

Creating style and beauty on the crew included Angel Garcia. His dream since he was 16 was to be a make up artist. His first job was at a local Halloween hunt, “this caused me to stumble on special effect makeup. From that very moment he was obsessed with everything makeup. The fact that you can change someone’s face into a creature unknown, to helping women gain and find confidence they never knew they had.” For him makeup wasn’t something with rules when it came to being creative.  It is a way to express and showcase your own idea of beauty.

His dreams are far-reaching and focused. His ultimate goal in the makeup world would be to own a cosmetic line or have his name on a makeup line. As well as having an Oscar or two for best makeup in film.

His favorite part working with the cast and crew on Skin on Skin was, “watching everyone working together helping make a movie! Being on set was a great honor and was a huge step for me.”

His dream started with Lorelei Shellist’s  Dream With Wings. This program is, “a teen esteem program educates our Teens by teaching them critical LIFE Skills: Communication Skills, Self Empowerment Skills, Job Interview Skills and how to WIN in their own heart’s desires as they plan their own lives, thus giving Wings to their Dreams.”

Angel Garcia found this program beneficial to his dreams. The program provided, “self confidence. Going into Dreams with wings [sic] in high school being a closeted gay boy I wasn’t the most confident person. The group activities helped me open up to my classmates and helped me realized who I wanted to become and be.” Reaching this point in his dream the most valuable lesson is, “be kind and humble, and learn to listen.”

The most important advice he provides regarding caring for your face and make-up is, “moisturize, wear sunscreen, and at the end of the night clean your face. Most importantly love the face you have it is unique in its own special way.”

Angel says, “I thank my lucky stars, give thanks to god and the universe, and SMILE, because like my mother always says, ‘a smile can open many roads.'”

There were many on the crew and cast moved forward with their dreams from the editor, cinematographer, actress, actors, and musicians. Their passions provided a film about following dreams no matter what and sharing your dreams with the world. Lorelei states, “This short film is the product of a dedicated team of talented, courageous, and generous Spirit-driven “Angels” with pure intentions to, (as the founders of WLL say,) ‘share powerful’ and to co-create in the land of dreams.”

The film premiered at La Jolla Fashion Film Festival, The Cannes of the fashion film world. Many from the crew joined for styling with Angel, food, photos, and reconnecting. The hard work was completed and many dreams moving forward for many. They walked over to the red carpet in a group. Many wore items from the Runway RunAway Collection ®. Stay tuned for the Dream Dress Runway RunAway Collection ® release.  The film was full of dreams and overcoming to achieve.

Lorelei started the film project, Skin On Skin, reaching for her dream of telling her story, from runaway to designer. Reaching dreams and the ability to accomplish them no matter what challenges. She states, “In the process, new ideas and new images came forth, and well…the movie revealed itself and showed all of us what ‘it’ wanted to be.” Many in the film participated in the film reaching for their own dreams. She provided an atmosphere of focus, connection, excitement, and completion. Dreams are just below the surface, Skin On Skin.

Photos from the events 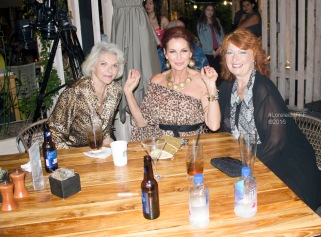 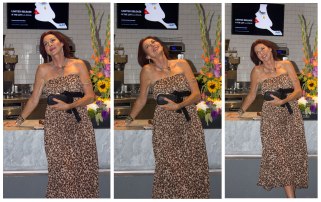 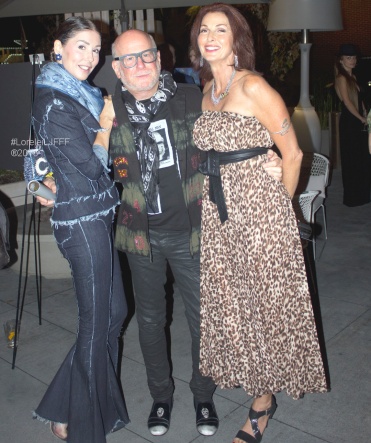 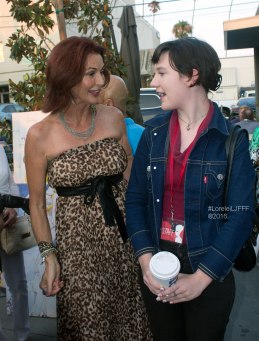 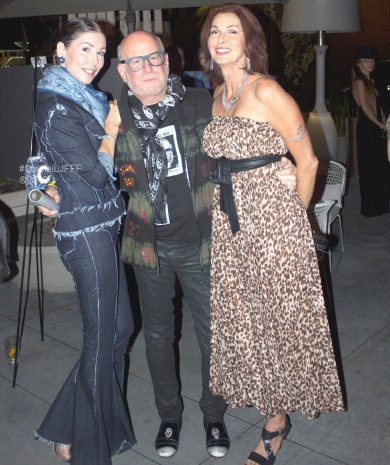 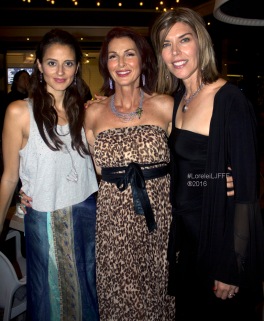 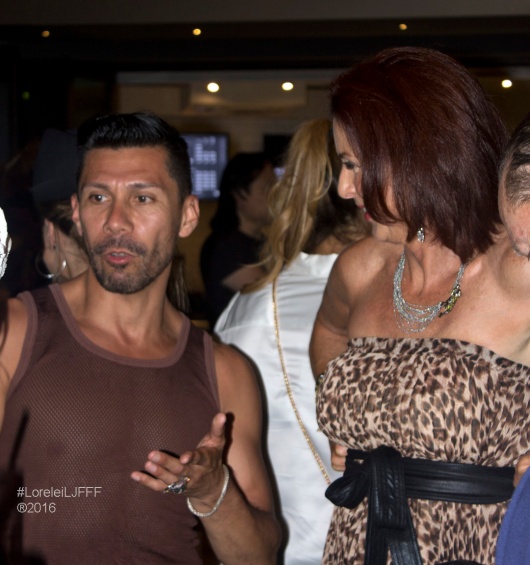